Listening back to this album, the first thing that strikes me is how sensible it all sounds. I remember being truly fired up by this band as a teenager, leaping around at their concerts and feeling like no other band was able to communicate with me in such a direct way. I don’t really hear that now. I hear well produced, excellently performed and quite beautifully sung songs which hold plenty of memories for me. I’m not particularly setting out to criticise this record, but when you consider that this band recently released ‘Journal For Plague Lovers’, even ‘Send Away The Tigers’ before that, it all seems a bit incongruous. 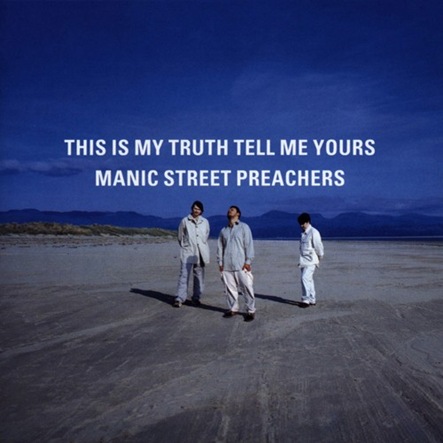 I won a competition to attend the album playback for this record at Cardiff Castle. I was plied with promotional goodies, ushered into a large room with plenty of cheesy local radio Dee-Jays who all ‘loved their work’ and, having heard what seemed to me like a pretty splendid record, suddenly found myself sitting at a table having a conversation with James Dean Bradfield about my home town. He’d once dated a girl from there, as it happened, and, while that information was of no great consequence to either of us at that particular moment, he proved himself to be a thoroughly nice bloke, keen to put me at ease. Looking back, it may well have been the fact that the longer he spent talking to me, the less time he had to chat with the local media types that spurred him on, but I’d think no less of him even if that were the case.

I still have numerous signed items from that evening, including an A4 lyric booklet for the album, something which contains some of the Wire’s best and worst work. ‘If You Tolerate This Your Children Will Be Next’ and ‘Black Dog On My Shoulder’ cover totally different topics but in similarly articulate ways but ‘S.Y.M.M.’ was simply never as good in reality as it may have seemed as an idea. For a start, the title was abbreviated, suggesting that the band already had some idea that it was more than a little toe-curling, but still pushed on regardless. Secondly, inspired though it is by the marvellous Cracker episode, ‘To Be A Somebody’, it never really seemed to know what it wanted to achieve and thus, as a result, it foundered on every level. Furthermore, it weakened what should have been a triumphant end to the album with the Richey Edwards tribute, ‘Nobody Loved You’.

There are some wonderful indie-pop moments on ‘This Is My Truth’, none moreso than ‘You Stole The Sun From My Heart’, to which I used to, if you’ll forgive the nineties parlance, pogo wildly. The computerised drumbeat (sampled from a pinball machine, if my knowledge of Manics trivia still serves me well) is a marvellously hooky way to begin the song and ebb and flow of verse and chorus is the work of a master musical craftsman. ‘You’re Tender and You’re Tired’ is an oft overlooked pop gem, with its plaintive piano and luscious, swooping backing vocal ‘ah-ahhhhhhs’ too often brushed aside as insubstantial. It has, at times, been my favourite song on the whole album, while live favourite ‘Tsunami’ is only saved from the ignominy of being my least favourite by the presence of the aforementioned ‘S.Y.M.M.’ It jangles and it chugs but it just feels so forced and I’ve never been truly convinced that the lyrics sit all the comfortably atop the musical accompaniment. Previous conversations have suggested that this might be one for the ‘irrational dislike’ pile, but I’ll not be swayed.

The Manics were in their imperial phase, riding high on the astronomical sales of ‘Everything Must Go’. ‘This Is My Truth’ is, to be absolutely fair, the logical next step. In the context of the horrible mish-mash that followed, ‘Know Your Enemy’, it seems to have aged reasonably gracefully. But it doesn’t entirely stack up. There’s plenty to enjoy on there, but it’s over-long, over-polished and, at times, over-wrought. Lop a few tracks off, chop a few tracks down and there’d be little to moan about. I listen to it fairly infrequently and spending a week with it has, in some ways, reminded me why. There are simply better Manics albums on my shelf if I want to listen to them. More urgent, more insistent, more shambolic records than this mass-market, adult-rock outing. It is, dare I say it, the Manics’ ‘nice’ album.