You’ll know the opening track, ‘Best Friend’, by now, all twee and eighties with its thin guitars, plastic drum sound and what appears to be somebody repeatedly whispering “arse” during the instrumental bit just after the two minute mark. It’s a classic indie singalong that gets better with each listen and sounds ludicrously good when paired with bright sunshine. But does the whole album stack up?

‘Me And The Moon’ has a lovely, unassuming, diminutive ‘do-dee-do-dee-do’ bridge before the predictably enormous chorus comes along. Having said this, they need to be careful with their cheesy drum sounds, as the one that kicks off this particular track evokes fairly traumatic memories of Alphabeat’s ‘Fascination’. The unashamedly smooth pop sound is something that they carry off with admirable style but there is always the risk that it might get a little grating.

Next comes the slightly surprising presence of ‘Let’s Go Surfing’, known to all who purchased their superlative EP, ‘Summertime’, and ruthlessly recycled to keep up the early run of peppy, youthful, ludicrously invigorated tunes. It’s a marvellous track and one of the reasons I grew rather fond of them in the first place. Still, after telling everyone that the EP wasn’t representative of what the band truly sounded like now, it seems a little odd to carry both this and ‘Down By The Water’ over onto the debut album proper.

Next up, ‘Skippin’ Town’ is, essentially, the first couple of tracks deconstructed and then rebuilt in a slightly different pattern. The upfront drums, frenetic jangle and wavering vocal is only half the deal. I need tunes. And by tunes, I mean different tunes. It’s far from awful, but that’s hardly the endorsement that anybody would be after. It’s like trying to pass off a particularly potent fart by pointing out that at least you didn’t shit yourself.

New single ‘Forever And Ever Amen’ sounds punchy and urgent on the radio, and rightly so. It’s another tremendous release, favouring the slightly restrained vocal style from Jonathan Pierce across the entire track to great effect. It features further deployment of the swooning chorus and a fine addition to what has gone before, but in the context of the whole album it’s slightly less potent, feeling, as it does, simply like a continuation of what has been before.

After the welcome and, let’s be absolutely fair, bloody lovely lull brought about by the eighties-power-ballad-in-skinny-jeans that is ‘Down By The River’, the accelerator is firmly applied once more. Indeed, the band are so desperate to resume the somewhat tiring pace that ‘It Will All End In Tears’ pretty much stutters into life as the last note of the previous song is struck. Another charming chorus, another fairly unremarkable musical backdrop.

‘We Tried’, slower, mournful and twinkly, is much more like it and comes at just the right time to stop any harrumphing becoming too pronounced. It strikes the perfect balance between the rickety, murky sound of mid-to-late eighties indie and their 21st century pop sensibilities. Across the dozen or so listens I’ve had to this album, it’s one of the songs that genuinely catches my attention every single time. And rightly so. A delight. 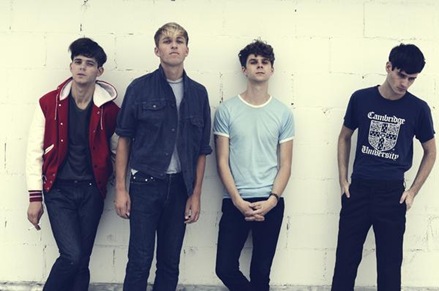 Guess how ‘I Need Fun In My Life’ starts. Thumpy drum? Check. Twangy, wayward guitar part? Check. Understated verse before explosive chorus? Kind of. It’s all there apart from the enormo-refrain, opting instead for a quite deliberately one-paced chorus, offering some constant shade after far too much light. And then, just when you think it can’t possibly be safe to untense the muscles and anticipate something a little different, the next song starts with acoustic guitar. Acoustic fucking guitar. Not big drums. Not even small drums. I know, I know, it’s the name of the bloody band but it’s not a hard and fast rule otherwise the Stereophonics would be called The Interminable, One-tuned, Guitar-taunting Twats. Still, acoustic guitar, spacey synths and a beguiling anti-chorus using the song’s title as the main refrain: “I’ll Never Drop My Sword.”

Album closer, ‘The Future’, ironically enough, starts like eighties New Order, slowly layers in some lovely chiming percussion and roams around with a spectral elegance that I’d have enjoyed hearing a little more of. It matches ‘We Tried’ and ‘Book Of Stories’ for quality and sheer class and is a strong, confident way to wrap up a debut record. It doesn’t just sound like another one of their songs and it simply serves to underline the lack of variety that renders the middle chunk of this record a little underwhelming. A largely successful debut, then, but a band with much more to give, I suspect. Don’t be surprised if it receives a raft of 9/10 ratings though.

One thought on “New Music Monday: The Drums ‘The Drums’”