As the Green Man festival came to a close, the rain had returned, Tindersticks had helped to erase the memory of Mumford and most people had donned their waterproofs and pitched up at the main stage for Joanna Newsom. There were still a select few of us wise enough to be tucked away in a tent, watching Efterklang provide one of the performances of the weekend. At one point, a seemingly rather well refreshed chap dressed as Batman leapt on the stage and was embraced by the band, keeping him on stage for the entire song as he whipped the crowd up into a state of rapture. It was a magical way to round out a distressingly damp weekend and, as we shuffled out through the Newsom masses, I knew ‘Magic Chairs’ was going to receive rather more attention than it had up to that point. 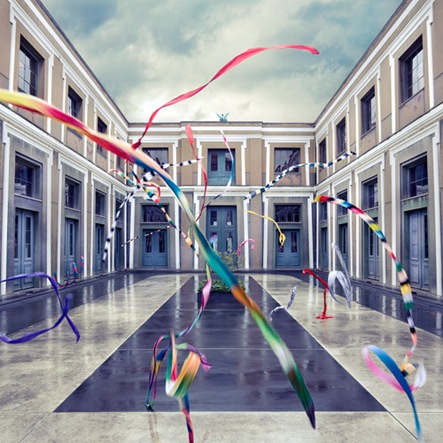 Awkward, angular and euphoric, the third full-length outing by Denmark’s finest is a resounding triumph, coming close to capturing the chaotic utopia of those live performances. ‘I Was Playing Drums’ belongs on everybody’s Best of 2010 compilation for its curious combination of strident bass, twitching drumbeat and swooning vocals. It wilfully scorns most conventions of pop and yet still emerges as a delicious little earworm.

Like a sing-song in a broken lift, ‘Magic Chairs’ is both a record to revive flagging spirits and to claustrophobically fuck with your mind via a decent pair of headphones. Stuttering beats, melodious layers often bordering on drones and bold orchestration raise tracks like ‘Alive’ and ‘Scandinavian Love’ out of safe territory into somewhere altogether stranger. Having released a CD/DVD set of their last album performed with the Danish National Chamber Orchestra, ‘Magic Chairs’ is undoubtedly enriched by that experience and is their best yet. Picking up from where the rightly lauded ‘Parades’ left off, the songs here are boldly orchestrated and take some time to fully reveal themselves. It’s a courtship to cherish.

How do you follow a debut record of such quality, such depth and such beguiling songwriting that nobody was able to believe you were still in your teens when you made it? With relative ease, it would seem. At the risk of getting repetitive, it’s hard to believe she made this record whilst still in her teens too. 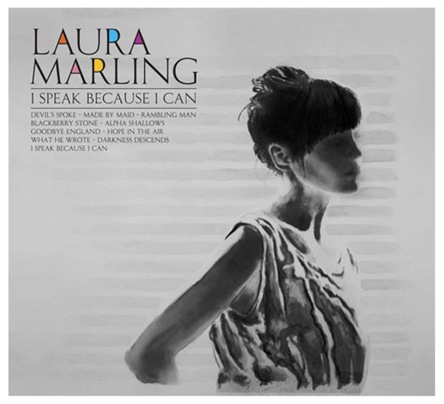 ‘I Speak Because I Can’ was largely recorded live to tape, Laura Marling and her assembled band rattling through these tunes in one room under the guidance of the esteemed Ethan Johns. It should be noted that there’s a little less jangle than on the debut and this is a rather more intense affair. Opener ‘Devil’s Spoke’ is an all out folk assault, before the quieter textures of ‘Made By Maid’ and ‘Blackberry Stone’ move into view, the latter a rather more fulsome rendering than the b-side incarnation which previously accompanied ‘Cross Your Fingers’. Between these two sits the first of the album’s true gems, ‘Rambling Man’. A fine example of how to build a song slowly but surely, with no need for epic strings or ludicrous guitar breaks, it is also home to one of Marling’s best vocal performances to date. She languidly curls her larynx around the opening verse, gathering in intensity as the band come shambling in and yet still holding back until the final renderings of the chorus. This transcendent vocal flourish follows a quite startling breakdown in proceedings in which, with almost eerie conviction, Marling tells us that, “it’s funny how the first chords that you come to are the minor notes that come to serenade you. It’s hard to accept yourself as someone you don’t desire, as someone you don’t want to be.” The song seems to suggest that the character in the song, be it autobiographical or otherwise, is happy to not fit in, provided they be accepted for who they truly are. The almost euphoric chorus, reminiscent of ‘Blue’-era Joni, belies the rather more complex undercurrent.

‘Alpha Shallows’ appears in a more concise and haunting fashion than its previous outing on the ‘Night Terror’ single quite managed, while last year’s Christmas single ‘Goodbye England’ is not hindered by its festive associations and the refrain about never loving England more "than when covered in snow" seems more than a little prescient at this end of 2010. ‘Hope In The Air’ continues the moody and intense celtic folk tones first established by album opener, ‘Devil’s Spoke’. ‘What He Wrote’, on the other hand, tells the haunting tale of separated lovers over a sparse acoustic backdrop. ‘The waves came and stole him and took him to her’, sings Marling, and by God she sounds every bit the wronged wife. It is this subtle but quite magnificent vocal dexterity that sets ‘I Speak Because I Can’ apart from ‘Alas I Cannot Swim’, in the same way that that debut was a subtle, but notable, shift on from the sound of her early demos and EP. Progression is obvious, but in a fashion that I can only imagine will win favour with devotees of that stunning initial outing.

‘Darkness Descends’, replete with beautiful, double-tracked vocal, has a levity of touch that is welcome after the intensity of ‘What He Wrote’. The galloping drums are back on what is perhaps the most obvious indication of the album having been recorded with the whole troupe playing together in the same place. There’s a gentle, rough-around-the-edges feel to the arrival of some of the backing vocals and the halting of bits of percussion that is utterly, utterly charming. You’re probably smiling by this point. Album closer, ‘I Speak Because I Can’ quickly puts paid to that, opening with the line, “my husband left me last night, left me a poor and lonely wife.” The title track builds to a suitably wrought conclusion before simply stopping and bring the album to an atmospheric, anticipatory and downright amazing conclusion.

‘I Speak Because I Can’ is a less immediate record than ‘Alas I Cannot Swim’ and it is a step on from that record’s sound also, but it is a superb second offering and of a consistently high standard. While it doesn’t scream instant classic at you, after a dozen or so listens you’ll feel like there was never a time you hadn’t heard it. And that will make you feel good.

After an excursion into glam with 2006’s splendid ‘The Life Pursuit’, followed by a considerable period of time during which things went rather quiet on the Belle and Sebastian front, ‘Write About Love’ marks something of a retreat towards their ‘home’ sound. Few and far between are the joyless ear-haters for whom the Trevor Horn produced ‘Dear Catastrophe Waitress’ and some aspects of that polished swing-pop are in evidence here, particularly on relentlessly cheery opening track ‘I Didn’t See It Coming’. 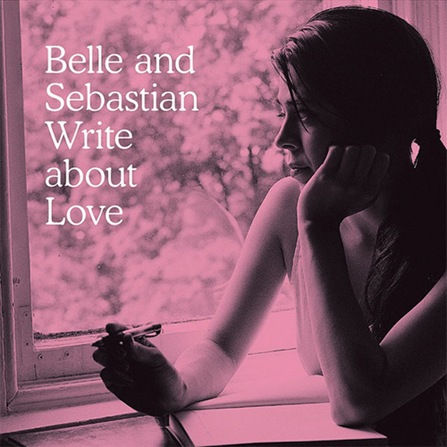 The old lumbering jangle which made them so adorable in the Jeepster days makes a welcome appearance on the enjoyably titled ‘Calculating Bimbo’, which never rises above a saunter, while some vintage forlorn trumpet sits neatly on ‘The Ghost Of Rockschool’.

‘I Want The World To Stop’ is the real tour de force on this record and one of my songs of 2010, with its buoyantly taught bass line, swirling strings and epic finale. What’s not to like? And yet, as with Massive Attack, there seems to a group of people who begrudge the band for not still sounding exactly like they did prior to signing to Rough Trade, an era which, we should remember, ended with a whimper not a bang. Yes, this album has Norah Jones on it, but she has a delightful voice which works far better with Stuart Murdoch‘s than I would have expected, especially when put across an organ heavy ballroom number such as ‘Little Lou, Ugly Jack, Prophet John’.

‘I’m Not Living In The Real World‘, built around a delicious ‘ooooh’ backing vocal line, is one of guitarist Stevie’s Jackson‘s occasional outings and an absolute pop monster, secreted early in the second half of the album. Murdoch also takes a backseat for ‘I Can See Your Future’, which is sung and arranged by Sarah Martin, both roles, but for a slightly clunky breakdown, she handles with aplomb. Things are rounded out with the glazed guitar sound of ‘Sunday’s Pretty Icons’, a slightly muted conclusion which is a nevertheless wistfully pleasant way to leave things. ‘Write About Love’ is not perfect, but it’s a great album which works best when digested in one sitting. Yes, you can extract a couple of tracks to terrific effect for compilation purposes, but I can see how otherwise cursory listens will leave people a little cold. For me, it’s a cracking vinyl record – warm, wilfully vintage and neatly split into two halves. It works for me.

In 2010, Stevie Wonder is a slightly schmaltzy, singalong stadium filler who invites Michael Eavis to sing – sing, not dance, sing – on stage at Glastonbury. While still a legend as a result of a number of classic albums in the Sixties and Seventies, his edge is long since gone and his musical style paused somewhere in the mid-Eighties. Thankfully, there are others now looking to wear his crown and the finest amongst them is Aloe Blacc. 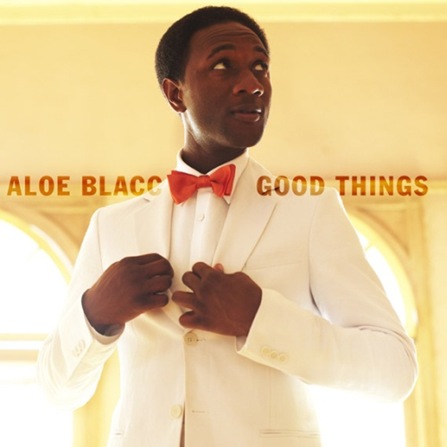 ‘I Need A Dollar’ was the lead track from this vigorous collection and regular readers will recall me banging on about the track at the time. Repetitive, outrageously catchy and downright funky (achingly hip, me) it warrants the spending of a tenner on its own. There’s a spellbinding stripped back version available here.

The effortless, oozing guitar sound beloved of not just Stevie but also Al Green, Bill Withers and the magnificent Curtis Mayfield is present on the gorgeous title track, while ‘Take Me Back’ comes on like one of the latter’s more dramatic numbers. All of the above influences have their part to play at various points on ‘Good Things’ and the result is as warm and accomplished a soul album as you could wish for. Yes, it’s a 2010 release, but it can happily sit alongside its influences in the racks comfortable in the knowledge that nobody’s going to say it doesn’t belong there.

‘Politician’ opts for the repetitive epic approach so keen used by a certain Liverpudlian foursome and it even has a reprise at the end of record, which thrills me more than I should really admit in public. It really does have a full on ‘Sgt Pepper’s’ feel to it and I’m not just using a Beatles comparison because it’s the only reference point I’ve got – it genuinely does. Add in the drawn-out ‘Femme Fatale’, stripped back ‘Hey Brother’ and swaggering ‘Miss Fortune’ and there’s plenty to recommend. And that’s all without mentioning my favourite track on the album.

‘Momma Hold My Hand’ is delicate, sweeping, heartfelt and just unutterably touching. As the strings emerge in the build to the chorus and Blacc’s voice is unleashed, it’s one of those hairs-on-the-back-of-the-neck moments that are far rarer than such a commonly used phrase would suggest. The story of a child’s relationship with his mother, from his infanthood to her descent into old age is perfectly captured and it has been known to make me misty-eyed. But, it is simultaneously utterly euphoric in that way that truly immaculate music sometimes can be. You really must hear it.