The new issue of Clash has hit the streets so it’s time to round up this month’s scribbles for you. An interesting range of stuff this month, including probably the second best jiffy bag of promo goodies I’ve ever received in the form of all four Cave reissues in their final, retail packaging. I remain mildly smug that my Black Lips review made it to print entirely unaltered. Anyway, let’s crack on, shall we?

After a solid and well-received debut, these analogue purists with a knack for good old-fashioned rock and roll deliver a follow up which oozes class. Sounding fifty years out of time and traversing genres without concern, it is unlike anything else you will hear this summer. And you really must hear it. Boldly commencing with the ska-infused ‘Tomorrow’, the album ranges from straight up rock and roll through raucous R’n’B and folksy swing. A band at ease with their sound, the joy of recording these songs is conveyed explicitly throughout, most notably on ‘Messing With My Life’ and ‘Don’t Make A Fool Out Of Me’.

Oh my, this is a very fine album indeed. You’ll be wanting it on vinyl and it will be a rather beautiful soundtrack to your summer. While the debut was perfectly decent, this is a massive leap forward and a wonderful, wonderful listen. Its appeal must be sufficiently obvious as my 9/10 rating wasn’t downgraded for once! That said, print readers beware: I did not, as you can see, finish my review with the line “We urge you to dance here.” Frankly, why would I? What does it even mean?

Woozy and warm, dreamy and delicate, Vetiver’s trademark aural hug is very much in evidence on this, their fifth outing. Lackadaisical drum machines and looped guitar patterns represent the most gentle of departures, augmenting some understated but beautiful songwriting. ‘Can’t You Tell’ wafts majestically, crying out for summery walks, while ‘Wonder Why’ is propelled by a drum beat which shuffles like a broken-footed man in a rush. If you don’t find yourself singing “my love is a river running soul deep” over the top of ‘Ride, Ride, Ride’ you have more self-control than me and such a classicist feel pervades the whole album. Utterly lovely.

I know, a good album on Bella Union – what were the chances? If you’re a Vetiver fan, this will please you greatly and if you’re not, I presume you’ve not heard them. Do some investigating. Do try the “soul deep” thing – it’s fun. This also had an altered conclusion, suggesting that the word limits should have been a little bigger than they were. ‘Utterly lovely’ became: ‘The Errant Charm is utterly lovely and we urge you to join its charms’. All these out of control urges, eh? Can only imagine the frisson of sexual tension in the office. 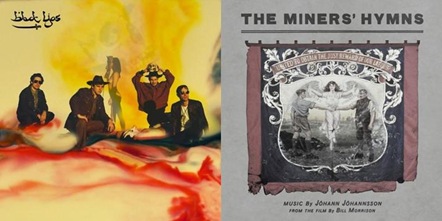 After five albums of shamelessly retro ‘flower punk’, sounding not unlike the tracks from the Nuggets boxset you skip, production duties are handed over to everybody’s favourite celebrity producer with crap hair, Mark Ronson. Over half of the album was recorded during a ten day bender in Brooklyn, and a similarly intoxicated state might well be the way to enjoy this record as, in the cold light of day, it seems to be trying slightly too hard, like the friend whose stories always start with “I was really drunk…” Which is not to say that the sixteen songs here are particularly bad – after all, you still speak to that friend, don’t you? – but their wilfully shambolic drive is best taken in small doses. ‘Bicentennial Man’ is a fine burst of late-sixties inspired garage rock and ‘Raw Meat’ is an irresistibly cheery, under-two-minute adrenalin rush replete with a fine bit of whistling. If The Drums’ debut seemed oddly polished and soulless to you, and I imagine it did, then ‘Arabia Mountain’ could scratch that particular itch. Production is loud and punchy and even the quiet bits aren’t quiet, which makes all sixteen tracks in one sitting a bit like hard work. The churlishly lopsided album closer ‘You Keep On Running’ is so completely indulgent it makes you wonder if they’re taking the piss. A bit of determined cherry-picking will improve matters no end, although when the odd song pops up on shuffle, it’ll raise a smile.

It’s alright. I’d buy many, many hundreds of albums before this one. Feel free to email me for a list if you’re stuck: justplayed@hotmail.co.uk Still, I quite like the actual review.

Deftly crafted minimalism with a brass ensemble may sound slightly oxymoronic but this soundtrack to the film of the same name is a curiously engaging work. Recorded in Durham Cathedral, and featuring a sixteen-piece band of parpers at its core, ‘The Miners’ Hymns’ is at times hymnal and stirring, final track ‘The Cause Of Labour Is The Hope Of The World’ evoking a more severe and subdued Efterklang. As a result of its soundtrack status, things are prone to occasional lulls with three tracks exceeding ten minutes. However, Johansson is capable of some beautifully stirring music, and when this album soars, it is a treat.

Not the most remarkable thing I’ve ever heard. I’m quite fond of my ambient stuff these days but this didn’t really grab me. The new Dustin O’Halloran or Hauschka offerings, also both on FatCat, are well worth grabbing though.

The latest instalment in Mute’s reissue programme is an embarrassment of riches, including two of Cave’s absolute classics. The tail-end of the raucous and raw initial incarnation of the band is captured on 1994’s ‘Let Love In’, with the genuinely macabre ‘Red Right Hand’ the standout moment. Before the reflective and reserved majesty of 1997’s dazzling ‘The Boatman’s Call’ came 1996’s ‘Murder Ballads’, a curiously light-hearted record about death. It’s almost certainly nobody’s favourite Cave album but it’s aged better than anyone might have expected and Kylie no longer seems quite such a strange choice in a post-everything, 21st century world. While the bang and clatter of old may have been on the wane, there was no let up in intensity and 2001’s ‘No More Shall We Part’ showcases Cave’s masterful lyrical precision. That album’s ‘God Is In The House’ is both acerbic and wry as it flags up contradictions in small town America’s belief systems, while ‘Love Letter’ is starkly direct and beautifully embellished by the presence of album guests the McGarrigle sisters on backing vocals. Accompanied by genuinely engaging documentaries and bonus tracks, these deluxe editions are both a fine place to start and a great way to reminisce.

Writing about four Nick Cave albums in just over 200 words is like trying to do a four course meal in five minutes. However, let me take this opportunity to tell you in the clearest possible terms to buy these albums. The uncompressed audio on the DVDs sounds superb and the CDs are no slouches either. Also well worth your time are the documentaries about each album, featuring reflections on these wonderful records from everyone bar the man himself.

One thought on “June Reviews”