I didn’t get ‘Hospice’ at all. I thought it was sub-Arcade Fire histrionic drivel. I’m not an awful lot more kind about it now, if I’m honest. But this really is not ‘Hospice’. Peter Silberman’s vocals are still largely falsetto and the subject matter is not much more cheery, but the music, oh, the music! Consensus seems to be that it takes more than a casual listen to love ‘Burst Apart’, although I think plenty of its charms are on show from the off. Certainly, once your play count is in double figures, you’ll have it on your list too.

The stuttering, shuffling drums of ‘French Exit’ demonstrate the languid, skulking tone at the heart of ‘Burst Apart’, telling the listener that they may not know this person as well as they think. ’Parentheses’ crackles along, with vocals like a Wild Beast in recently washed jeans and menacing guitar bursts offering a general coating of unease. They were aiming for “spooky” and they seem to have achieved it.

However, there remains a lightness of touch across ‘Burst Apart’ which makes for a far less oppressive listen than ‘Hospice’. Towards the end of ‘I Don’t Want’ Love’ the sound of Jeff Buckley cooing from the more soulful elements of ‘(Sketches For) My Sweetheart The Drunk’ makes a welcome return, concluding a wonderful pop burst to open proceedings. Then there’s ‘No Widows’, a gorgeous, dubby piece with a serene gloss added to a trippy, endless rhythm section.

Woozy instrumental ‘Tiptoe’ sets the scene neatly for the twinkling ‘Hounds’ which tracks the paranoid troubles at the heart of a relationship and slowly withers in on itself around a mournful trumpet figure. ‘Every Night My Teeth Are Falling Out’ builds to an anxious crescendo without the need for the histrionics which are briefly unleashed on album closer ‘Putting The Dog To Sleep’, which seemed to be the one track prone to criticism in initial reviews. After a few plays, it seems a fitting, sprawling, soulful end to an album which truly rewards anyone willing to spend some proper time with it.

Secretly Canadian is, a little like Bella Union, one of those labels where you could leave them your bank details for a direct debit which would ensure that you get everything they release, safe in the knowledge you’d be receiving some excellent records. Most notably, they’re the home for the staggering talent of Jason Molina in his various guises, but they’ve also released gems from Jens Lekman, Richard Swift and Suuns. The mere presence of the label’s name on a sleeve is enough to grab my interest, although in this case the rather beautiful sleeve could probably do the job on its own. Which it might have done, had we not all been primed by the hints-of-greatness 2008 album, ‘Wagonwheel Blues’ and last year’s tantalising EP, ‘Future Weather’.

‘Slave Ambient’ is, in part, finely honed Americana: a smooth listen with chiming guitars and gently layered synths combining in softly affecting fashion. Which is not to say you’ll be hearing it on Heart FM anytime soon, more that if you’re a Springsteen fan who has a bit of time for a little spaced-out indie then you’ll be on safe ground here. There’s something of an electronic haze hovering all over this which slowly becomes one of the album’s more endearing production aspects. The hypnotic flow of the ambient sounds conjures a Jason Pierce who’s had his Weetabix.

Much has been made of the departure of band member Kurt Vile, whose own splendid solo offering appeared this year (‘Smoke Ring For My Halo’ – close to being in this list), and his role in a lot of the excellent interplay of the guitars on the debut with Dave Hartley, who still remains. While his solo work is understated acoustic splendour, his former band have gone on to create something altogether more grand, perhaps best captured by two tracks in the second half of the album.

Firstly, the elegant electronica of ‘City Reprise #12’ is a surprisingly relaxed piece after the frenetic road trip roar of what has come before, but this is swiftly followed by ‘Baby Missiles’, with its frantically strummed guitars, roaring harmonica and thumping drums. It’s essentially Springsteen with the shoegaze filter switched on. Which works ridiculously well. Turn up both of these tracks and let them wash over you. You’ll find that, for a record with so much electronic noodling going on, there is an old-fashioned analogue warmth to it all. ‘Slave Ambient’ is a gorgeous album which is a lot less simple and effortless than it may at first seem.

He makes grown men cry, you know. Another case of not allowing yourself to be put off by the combination of hero worship and ludicrous overstatement, this one. Indeed, the weight of expectation is a curious beast. Sometimes it can work in your favour: Ian McEwan‘s lightweight ‘Amsterdam‘ getting plaudits after the failure to duly reward the majesty of ‘Enduring Love’, ‘Be Here Now‘ getting five star reviews after lukewarm responses to ‘(What’s The Story) Morning Glory?‘ On other occasions it can leave with you no chance: most Radiohead albums since 2000 and the tiresome ‘is it as good as OK Computer or Kid A‘ comparisons, the forthcoming Stone Roses reunion gigs (trust me on this one). And then there are those who think “fuck it, people will give this a chance because of the last one” and crack on, doing their own thing. And while Justin Vernon didn’t suddenly unleash a new line in scatting jazz vocals here, ‘Bon Iver’ was quite pointedly not ‘For Emma, Forever Ago’ part two. 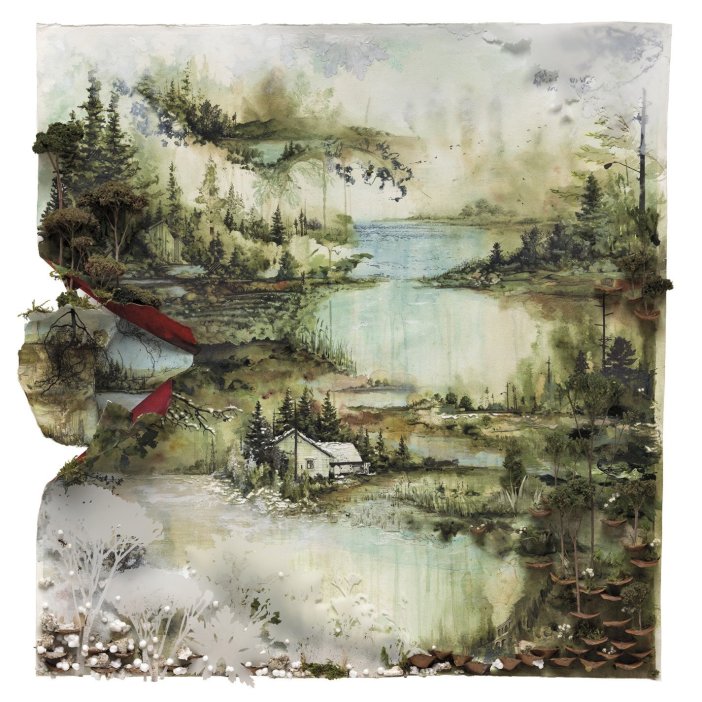 Exactly what it is, is another matter. It’s a pretty record, blessed with all sorts of sonic smuggery which charmed me from the off, and it’s an album which sounds curiously out of time. Which is not to say it is timeless, far from it in fact. ‘Bon Iver’ sounds pointedly dated at certain moments, not least on album closer ‘Beth/Rest’, which has predictably provoked buckets of wrath for its Eighties soft-rock tones. While there are undeniably contemporary references here and there, from the artwork to its last note it has the feeling of a moderately successful record of old, its beauty shining through despite the particular clothes of the time it has come from. Think ‘Punch The Clock’ by Elvis Costello, an album which was unmistakably made in the Eighties but which still stands tall thirty years on, thanks to the quality of its songwriting. I’m still not sure what particular artistic statement Vernon might be making by evoking middle of the road pop-rock schlock of old, but it’s not the enormo-howler some would have you believe. It’s more ‘Yuko & Hiro’ than ‘S.Y.M.M.‘ as end of album curveballs go.

There is much bigger, fully-fleshed out band sound to this album, which I gather is replicated pretty majestically onstage. It ensures that there’s a little more going on in all of these songs and the delicate way in which ‘Towers’ builds is a hushed delight, the drums only putting in an appearance in the second half of the track, and even then fleetingly. This is a great example of how to go ‘big’ without actually sounding excessive. It’s not fifteen orchestras, eighty-five overdubs and grandeur over quality. Yes, more money’s been spent and no, it’s no longer one man and his beard. But that’s already been done anyway.

The debut’s ubiquity meant that it got a little worn out at one point, anti-hype kicking in and restricting its emotional weight, and it is the substantial impact of that record which will ensure that people are ready and willing to give this release a shot. No bad thing, as I can’t imagine that the breakthrough would have been on the cards with ‘Bon Iver’. A delicate curio originating from the JagJaguwar stable (though released in the UK via 4AD) with gorgeous artwork and a handwritten lyric booklet, this should really be a bloggers’ favourite which cleans up in critical circles and sells a few hundred copies. Inevitably, it’s not been quite so critically lauded as the debut but that this was actually one of the most anticipated releases of 2011 is actually quite heartening, and shouldn’t take away from the fact that it’s actually a cracking set of songs.