Having mellowed in recent years, this eighth studio outing represented something of a rebirth. 2007’s ‘Sky Blue Sky’ was a lush and mature record which captured a band with nothing to prove and a confidence born of having made it through trickier times. Unfortunately, such confidence resulted in the somewhat undercooked and surprisingly forgettable ‘Wilco (The Album)’ in 2009. I feared that this was it: the start of the slow descent into mediocrity and middle aged chug. I have had the error of my ways thoroughly highlighted by both this record and their recent UK tour supporting it. This is as strong an album as Wilco have ever put out, just without the drama of being dropped or filmed dramatically in black and white. 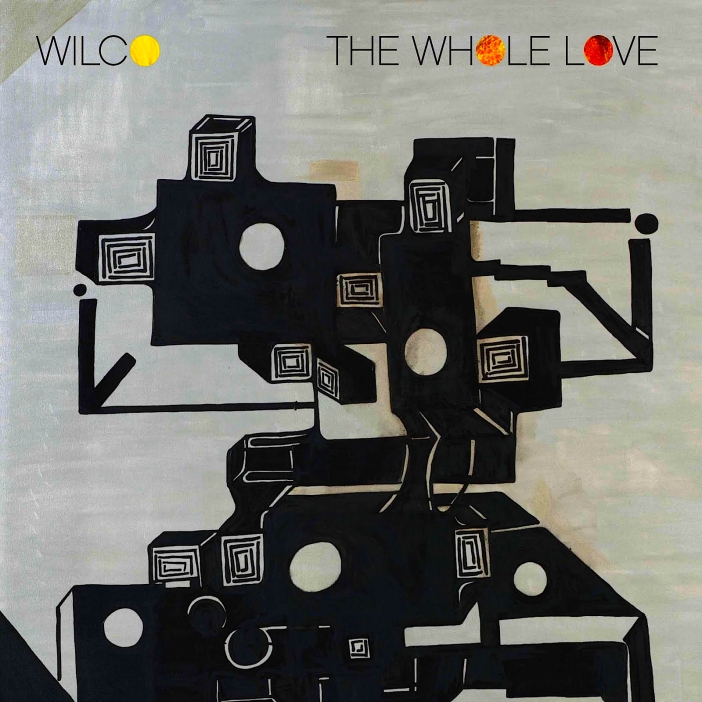 Inhabiting a world somewhere between the emphatic organ-chug of prime Costello which puts in a performance on the excellent first single ‘I Might’, and the more delicate moments of ‘The White Album‘, classic hooks and sing-song choruses are prominent. ‘The Whole Love’ is a nuanced record which highlights musicians with a stunning grasp of melody and a lyricist no longer at war with himself. Less polished and with a real warmth so lacking on their last outing, this is nevertheless an album which asserts its presence from the off.

Album opener ‘Art Of Almost’ emerges from a squall of static into something urgent and convulsing, before finally capitulating to its own spit and swagger seven minutes later. Meanwhile, ensuring that the album’s conclusion is no less stunning than its start,  the twelve-minute ‘One Sunday Morning’ (fourteen if you go for the double vinyl) is a lolling, meditative conclusion unlike anything the band has previously recorded. It is plucked into life, the most delicate touches of piano initially underscoring it, before Tweedy appears, seemingly pressed up close to the microphone, gently intoning the vocal. It never gets any more energetic, despite a little xylophone here and the odd floating drone of electric guitar, but that’s not to say it isn’t one of the most beautiful things the band have ever done. Considering its length, the time flies and the utterly gorgeous musical interplay is an absolute joy to take in, time and again.

And that’s without mentioning stone cold classics like the title track, ‘Sunloathe’ and ‘Capitol City’. Having forged a reputation for making sonically adventurous albums only to find aural contentment and a certain cosiness, they appeared to have commenced the ploughing of a particular furrow. However, as demonstrated by their clear enjoyment during an incendiary live show I saw several months ago, they are very much back in the game. Put simply, this isn’t just an excellent addition to the record collection of a Wilco fan, it’s a remarkable record full stop.

Everyone has a couple of bands they’ve been following forever. We’ve all experienced that peculiar feeling of seeing them go from being your little secret to the recipients of public adulation. If they’re a band who sprung into life within the last five years or so, you’ve likely bought their small-scale, limited releases across the internet and told as many people as possible about how great they are and why they should listen to them too. The most prominent of those acts for me is Tom Williams & The Boat. 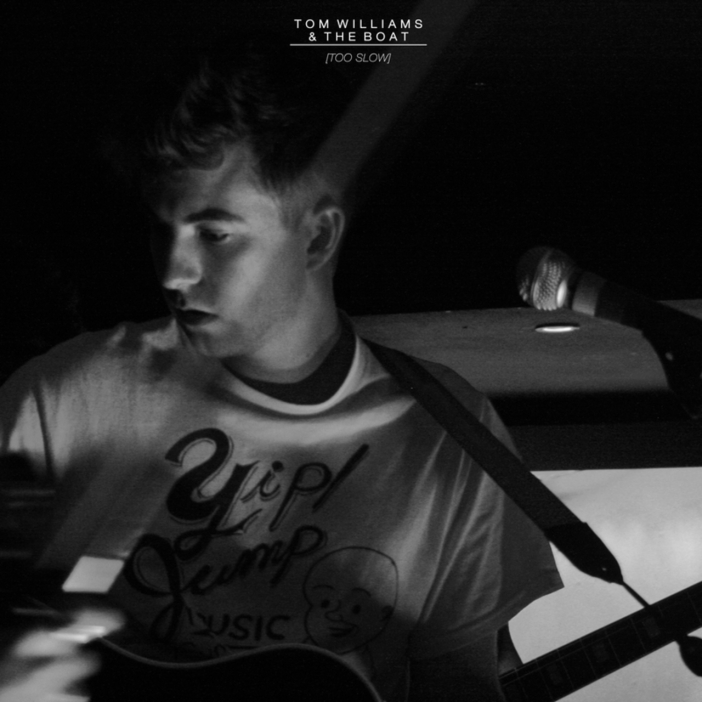 One of the reasons why I love this band and their debut album, is that they don’t really sound like anyone else currently plying their guitar-wielding trade right now. For a start, their ‘the’ is the fourth word in their name rather than the first and secondly they’re somewhere between alt-rock and nu-folk in an exciting new genre which I (obviously never out loud) tend to refer to as “fucking great.” When Maconie tries to say he invented this on some talking heads show in ten years time, you tell ‘em it was me. The music is urgent and raw, powerful and at times endearingly naive. It doesn’t sound perfectly polished because it isn’t. It’s the sound of a bloke with a really rather superb taste in music finding his way, carving out a sound from what interests him and working with a band who make it all so very effective. Williams’ curiously angular vocal delivery is one of the band’s finest assets. On the occasions when he does unleash its full force, things get properly exciting.

Opening track ‘24’ comes on as a gentle acoustic number with the lyric “I can’t imagine a woman being true” hinting at all kinds of open air heartbreak only for the band to come clattering in to set the pace, rhythmic guitar and violin beautifully twinned. Before you have a chance to take in what’s just hit you, two of the band’s early singles follow in quick succession. ‘Concentrate’, which has a scuzzy throb undercut brilliantly by an ominous and wailing violin figure, features the magnificent lyric, “they don’t know my dad, he’s this town through and through. Old school, fifty-something balding racist, and so his mates are too.” Williams’ lyrics are not just there to tick a box, he’s got something to actually say. His impassioned commentary on life in 21st Century Britain is often breathtakingly incisive and his knack for imagery is in evidence right across this excellent debut.

Third track ‘90mph’ is a grandiose wall of sound affair, all pounding drums and jangling guitars. The addition of some soulful saxophone lends it the air of a classic. Just one you haven’t heard played everywhere. It’s one of the tracks you’ll be putting on compilations for people when you’re telling them about this amazing new band you’ve found, trust me. Not that there aren’t other candidates for that slot in the playlist. Just when you think you’re getting an idea of what this lot sound like, out comes ‘Get Older’. Sparse, moody and actually quite malevolent, it’s the moment when the idea of them being an indie-folk band pretty much disintegrates. It is this track which best demonstrates how far this band have come in the last four years, such is its warped and wonderful ethos. This isn’t some lame wet fart of indie schlopp designed to get the tight-trousered indie troop excited for three minutes before they listen to the new single by the fucking Wombats. This is playing for your heart and soul.

The more reserved moments are no less special. ‘Wouldn’t Women Be Sweet’, replete with opening lines “I met you in a bar in 2003, we started going out immediately. I thought it would be fun, I thought it would be easy, didn’t realise you’re a maniac,” makes for a charming breather at the album’s midpoint, despite possessing a comically grim narrative. It’s not long before the whole crew are back on deck, ‘Train Station Car Park’ offering a similar bombast to the album’s openers and somehow executing one of the most difficult tricks in modern music – enjoyable use of a harmonica. Seriously.

‘See My Evil’, having previously been the lead track on an EP of the same name, makes an appearance near to the end of the record. It sounds just as shudderingly splendid as it did that first time: like a grubby Arcade Fire after a night in a dark room with a fine malt, headphones and a copy of Jeff Buckley’s ‘(Sketches For) My Sweetheart The Drunk’. Another track from that EP, ‘Strong Wheels’, is propelled forth by a perpetual bass line which evokes the thrum of a cruising engine as Tom sings “me in my car, in the snow, off my head.” Coming as it does just before ‘See My Evil’ it all adds to the increasing sense of anxiety and menace which reaches a crescendo with the album’s closing track.

‘Voicemail’ initially creeps gingerly from the speakers, before exploding into a strangely measured but hugely powerful cathartic rumble. By the time the spoken world salvo of “Think I’m a terrorist and I’ll fucking act like one” is spat out you’ll be wondering exactly how we ended up here. The gently lulling guitar which makes a reappearance at the end feels like the musical equivalent of a cheeky grin and a crafty wink, capturing what this whole album does so very well. The stories told may be grim, grizzly and even macabre but that’s exactly what most of them are. Stories. Beautifully written and quite amazingly delivered, but definitely not tales of everyday life in Tunbridge Wells.

This record didn’t receive a full page spread in the NME and Pitchfork didn’t spend hours trying to decide how to artfully and intellectually sabotage it by dropping its score by .3. Indeed, it quietly appeared, wowed the willing and took up residence in the ears of those lucky people for much of the year. Listening to it ten months after it first appeared, I’m still just as impressed by both the quality of the songwriting and the coherence of it all as a debut record. He wasn’t on a Cool List and the ‘taste makers’ didn’t declare him the Sound of 2011 but, here at least, he sort of was.

The band are currently preparing their second album via the Pledge Music scheme and, based on the material being revealed to those who’ve already pledged, it’s not going to disappoint. ‘Too Slow’ remains available here, although vinyl copies are almost gone. See how I’ve resisted a really obvious pun based on purchasing quickly and the album title? See?