For one of the excellent Bandcamp Fridays, an ongoing initiative which gives the company’s share of any purchase within those 24 hours to the artist, I was scouting about for interesting things to try at the height of summer and found several folk whose ears I trust recommending the previous album by Scottish multi-instrumentalist Andrew Wasylyk. ‘The Paralian’ had passed me by previously but proved to be an excellent tip. Largely instrumental music which was built around a restored 19th century harp and a grand piano, it occupied a jazzy, ambient, bleepy, folky territory that was instantly appealing and ensured a keen interest in his subsequent release, ‘Fugitive Light and Themes Of Consolation’, which emerged in September. 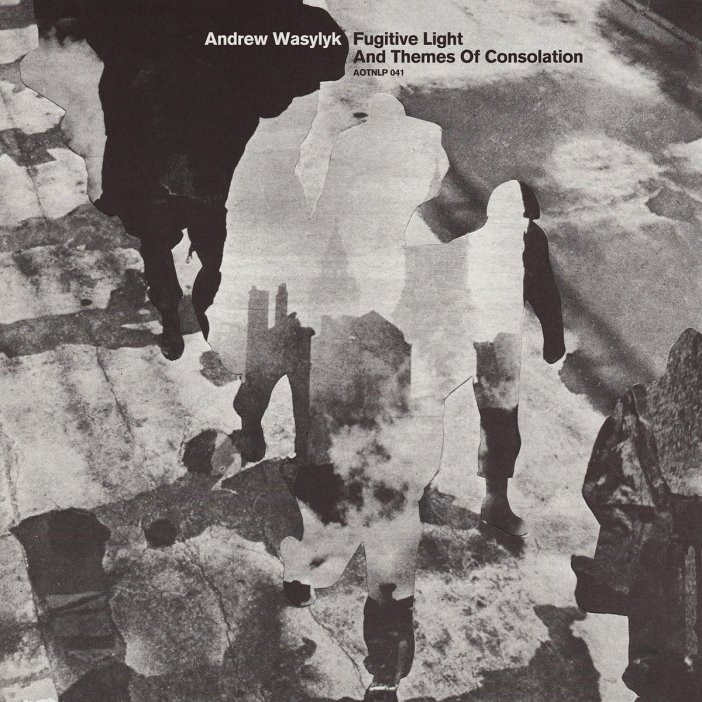 This new set picks up where its predecessor left off and is music for burdened minds and frazzled souls. Wasylyk’s fondness for David Axelrod, Alice Coltrane and, notably, the remarkable Virginia Astley is worn lightly but endearingly across these pieces, which fill the room thanks to the exquisitely sensitive mastering. I am reminded of the King Creosote and Jon Hopkins collaborations, the melodic jazzy soundscapes of Bill Wells and the instrumental dexterity of Mark Hollis. The whole package is a delight, starting with the striking artwork before browsing the accompanying glossy book of photography.

While Wasylyk is joined by a variety of musicians to provide some strings and wind instrumentation, he takes care of the rest, including Mellotron, Moog, glockenspiel, Fender Rhodes and a selection of field recordings. The very best instrumental work is still overwhelmingly lyrical and such is the case here. ‘The Violet Hour’ paints images of sweeping autumnal views as the light retreats, the temperature drops and the darkening colours perish to the floor.

The almost macabre combination of the beat and piano part for ‘In Balgay Silhouettes’ is deliciously enigmatic, crying out for an incident in the gloaming to accompany. The promotional literature made clear the connection to Wasylyk’s native Eastern Scotland in these pieces and the knowledge helps when attempting to gain purchase on the vivid imagery conjured. ‘(Half-Light Of) The Cadmium Moon’ builds to a conclusion so intense it seems to send a strong breeze from the speakers along with the piercing instrumentation. It is stunning.

The whole record is one that repays repeated listens and which truly opened up after I neared double figures. Once the melodies were familiar, I found myself focusing much more on the specific parts, the layers and the consistent emotional impact of these special songs. As others recommended Wasylyk to me, I emphatically continue the chain.

Buy ‘Fugitive Light and Themes Of Consolation’ on vinyl from Resident

‘Long Hot Summers’, a rather wonderful recent documentary which tells the story of The Style Council, finishes with an unexpected and understated reunion performance of ‘It’s A Very Deep Sea’. With little fanfare, and all participants clearly enjoying the moment, a thirty-five year old song is relocated to the here and now with the full knowledge that it will mean so much to so many. It is just one moment which demonstrates Paul Weller’s light touch in his approach to his history. His willingness to discuss and perform songs from the past half a century without feeling constrained, defined or filed away surely stems from his continuing joy at being in the studio.

Read interviews with Weller and you’ll find a person buzzing about the most recent thing they’ve recorded, happy to discuss where the inspiration is coming from and where he’s off to next. In retrospect, the dearth of inspiration around the early Noughties to which he freely admitted and that prompted the not unpleasant but far from essential covers set ‘Studio 150’, was integral to rebooting him for this latest phase. The run he has been on since, starting with ‘As Is Now’ and arriving at 2020’s ‘On Sunset’ has been largely excellent. This latest was a huge headphones record for me during the summer and I love the rhythm of it all.

The spacious soundstage of ‘More’ is a fine example of Weller’s current strengths, foregrounding percussion, elevating striking but brief piano motifs and eking out mystery from an acoustic. It also features a small passage in French, courtesy of Julie Gros of Le SuperHomard. The gradual ascent to a tight but effervescent wig-out is euphoric. The title track follows, floating on a mix of his eternally soulful vocals, strident strings and measured but uplifting brass parts. The raw majesty of his singing was laid bare on 2001’s still remarkable ‘Days Of Speed’ solo live album and his use of his voice has been especially dextrous since.

Much has been said about the eight minute opener, ‘Mirror Ball’, which slowly shimmers, occasionally drops out – either to experimental noise or a brief acoustic phase – and concludes with looping music box chimes. In some respects, that sense of several different things happening at once is an accurate marker for what follows. ‘Old Father Tyme’ coats the verses in reverb atop a strutting, hiccuping piano line, while ‘Village’ is a glorious, mid-paced reflection on contentment that is deftly and warmly rendered where once it might have been gratingly bombastic.

Indeed, there is still a little bit of genre-hopping at play here, following the pastoral folk re-fit that he pursued with 2018’s ‘True Meanings’. ‘Equanimity’ has a deceptively retro ‘Ringo song’ rhythm, but the instrumentation is arrayed with an elegant nuance that steers it somewhere special. ‘Earth Beat’ is a fairly logical place for the Paul Weller of The Style Council to find himself thirty years later, melding the old and the new. It’s a long way from ‘Heliocentric’ but he seems very happy to be there.

Purchase the purple vinyl edition from What Records