If 2011’s ‘Last Summer’ was a tentative step into the solo limelight after years as one half of The Fiery Furnaces, then ‘Personal Record’ is a bold stride to the front of the stage. While that debut was surprisingly conventional and accessible after what had come before, this was released to certain expectations. Expectations which it boldly surpasses. The Seventies pop-rock brush is liberally applied across these twelve songs to glittering, joyous effect, but these are not limp songs hiding behind dependable production. The slight pomp and polish is necessitated by some of the sharpest songwriting to be found anywhere in the last twelve months. Both lyrically and melodically, ‘Personal Record’ is pretty much perfect. 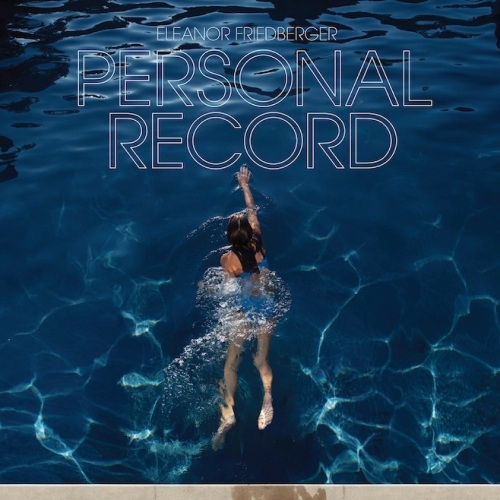 Written before ‘Last Summer’ appeared, and in collaboration with Wesley Stace, a British author who also operates as MOR artist John Wesley Harding, this is a relentlessly impressive album. Songs went back and forth, demos passed between two writers, rather than face to face, each tinkering with the other’s ideas until tracks found their eventual shape. Friedberger was trying out various tracks throughout touring commitments for the debut and had the whole thing pretty much ready to go as soon as she came off the road. As it turned out, it would be a little while before she actually went into the studio to put ‘Personal Record’ together, something which she has since regretted a little. You often hear of artists becoming tired of their songs by the time the public actually gets to listen to them, although it’s hard not to imagine anyone who’d put together this particular collection wanting a victory lap or three.

From the gleaming artwork, continuing her trend for sleeves which already look like classic LPs, through the immaculate production to the record’s tracklist – everything is right here. The wry title might actually have bettered suited her first solo outing, but it is a fine, fine name for an album, whatever it contains. Lyrically ambiguous, due to the sharing of the song-writing, there is a playful uncertainty about some of the wonderfully vivid stories told here. It is a record about records, has songs about the little details in life and lyrics ranging over shared experiences and adolescent nostalgia. If you’re not identifying with half of the tales told here, you’ll be marvelling at some of the genuinely brilliant couplets. Imagine a cheerful prime-era Elvis Costello and you might be somewhere close. This whole record is a triumphant delight to listen to, a twelve-track earworm all in one that needs restarting as soon as it finishes. However, I want to focus in on a couple of tracks in order to highlight just why this album is one of my true favourites in what has been a very decent year for music.

Firstly, the glistening, soulful shuffle of ‘Other Boys’ adopts an air of controlled nonchalance about a partner’s rather loose approach to their relationship, despite the fact that it’s clearly not ok. The meticulous detailing of the various other girls is littered with imagery that the aforementioned bespectacled one specialised in at one point. Take, for example, this exquisite stanza describing one such other: “Or the long-tail pony with the thick, dark mane, fourteen hands, four thousand names. You share her feed at the compound trough and then climb back on when she throws you off”. And that’s not all. Possibly my favourite lyric of 2013 is the wonderfully wry but fabulously evocative: “How could any man resist, a girl with such a big setlist?” The humour in a song with such a bleak burden demonstrates the emotional articulacy at the heart of ‘Personal Record’. The stories might not be entirely about her, or Stace, but they still feel bitingly real.

The other song I wish to pop up on a metaphorical plinth is ‘When I Knew’, which has been a compilation staple for me all year. Driving in with chiming indie jangle aplenty, it captures the noticing of similarities, the forming of a crush, the realisation of an attraction based on shared experiences. It’s the best three minute forty-five seconds long short story you’ll hear in some time. There’s the early attraction, noticing the other person across the room: “And you know what happened next, I said hi politely and we went to town for coffee.” Then there is bond forged by shared but uncommon interests which could fit into so many of ours lives: “They said we both like weird music and she played me Soft Machine and leant me a record which badly warped which screwed up everything.” There’s the moment of self-flagellation that our memories are so prone to: “And she was wearing a pair of overalls, so I sang ‘Come On Eileen’. I was being slightly mean and that just made her smile, which made me feel childish.” Then arrives the moment where it all came out into the open with the wonderful wordplay of: “I couldn’t get her out of my head, so I got her out of hers instead.” It’s an absolute masterpiece and as good a place to start as any with this glorious album. In an interview with Laura Barton in The Guardian, Friedberger said “I really like the gender-bending stuff in the songs. Obviously, it’s because I wrote the songs with Wes, but I like the idea of, ‘Am I singing about myself or am I singing about another woman or…?’ I like the mystery around it.” It’s that sense of shifting sands, of performing and inhabiting experiences without having always lived them that sets ‘Personal Record’ apart from ‘Last Summer’. Where that album was emotionally raw, this is emotionally rich. Be sure to seek it out.

The Fiery Furnaces are a band I’ve always been fond of, if not fanatical about. The wilfully jarring effects they often pursued could offset the blatant majesty of the vocals. Written largely on the piano, and with no worries about actually being really quite accessible, Friedberger’s first solo outing is a delightfully unassuming collection of quirky pop songs and it was one of several true surprises in 2011.

Centred around a period of Friedberger’s life in New York a decade past, the album is an autobiographical outpouring, underlined by the inclusion of several pages of a diary from the end of the album’s creation. ‘Scenes From Bensonhurst’ is a reaction to a friend’s experience at the hands of the internet: how easily people can be found, contacted and bothered. Titles like ‘My Mistakes’ and ‘Heaven’ are in no way cryptic, and a wide range of subjects are touched upon across the course of these ten songs in typically verbose fashion.

Her distinctive vocal style is, obviously, present but used in a more restrained fashion, sounding more soulful, more human. The early part of ‘Last Summer’ is littered with 70s style pop hooks; it even looks like one of those albums you find in the 1970s American Alt-Folk* section in a second hand record shop. As with so many group-member-goes-solo albums, it feels like the pressure is off and there’s no massive search for a concept or a ‘sound’. The warm, buzzing guitar which kicks in early on album opener ‘My Mistakes’ is glorious and jumps out of the speakers. You know, like music used to do before most of it was all mastered at the same sodding volume.

Friedberger’s tendency to rearrange the emphasis in words and sentences continues here and she’s said in interviews that she was interested in how the words sounded together, and not in terms of basic rhyme, but how they slotted together to form a verse or a chorus. It makes for a situation not dissimilar to when you listen to songs in a language you don’t speak – the vocals take on a role in the musical backdrop. This is reinforced by some great backing vocals on ‘Inn Of The Seventh Ray’, which bounce and echo all over the place, pushing the song in a different direction.

Having first listened to this album in the summer, it feels a little odd to be summarising its poppy delights while it snows outside. What I ultimately love about ‘Last Summer’ is its unassuming, but enormous, hooks. ‘Early Earthquake’ is a clap-a-long burst of euphoria which gently emerges from the end of the more complex ‘Owl’s Head Park’ and offers a fitting ending to an album which plays its trump card three tracks in. ‘Heaven’ is one of the most glorious tunes I’ve heard all year. It has a chug which would make for an easy segue into Take That’s ‘Shine’, it possesses Friedberger’s most soulful vocal of the whole record and it sounds like a classic old 7” single which would receive rave reviews and be described as ‘buried treasure’. The fact that it didn’t become a worldwide hit, doesn’t mean it shouldn’t have been.

*No? You need to visit a better second-hand shop.