A recent trip to York enabled me to visit a charming little record shop called Rebound. Thirty  thoroughly splendid minutes were spent flicking through racks and racks of CDs before progressing into the vinyl enclave at the back of the shop. As I made my purchas 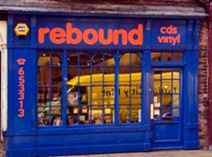 es I gleaned that business was reasonably decent, particularly in light of the one remaining high-street music chain, HMV, looking to shunt as CDs as into as small a space as possible these days. The shop itself is fairly new and opened up just as all of the other independent stores in the city folded. Where it differs from the dog with a gramophone (soon to be updated to show the dog pissing on the gramophone whilst watching a portable DVD player) is that all of the stock is second hand. Now, this is hardly a revolutionary new concept, but it’s a market that has grown rapidly in light of eBay and Amazon Marketplace. While you may not often get a chance to buy much second hand music on the high street, there are numerous online options.

Second hand music options have been further extended by the increasing space being given over to old vinyl and CDs by most of this fair nation’s charity shops. While these supplies remain largely Val Doonican and knackered old classical compilations, the number of people opting to ditch their record collections in favour of the beloved mp3 player ensures that there’s a pretty decent turnover of stock. Everyone’s favourite young northerners with odd hair, Arctic Monkeys, rammed home this point by putting the 7″ of their new single, ‘Crying Lightning’, into all of the UK’s Oxfam shops this week, while imploring fans to drop off some unwanted old records when popping in to purchase a copy. In theory, this should mean some decent stuff in your local Oxfam in the next couple of weeks, but we shall see.

As CD prices continue to drop and people continue to lose interest in the old fashioned concept of paying for music, prices paid for second hand CDs have fallen through the floor and, as you might thus deduct, the prices for the customer have dropped also. A quick perusal of Amazon Marketplace will allow you to pick up most back catalogue material for a few quid delivered, in not entirely unsatisfactory condition, and most recently released stuff without much trouble too. As someone clever, but not clever enough for me to remember their name, once said, people are keeping their new music costs low by buying albums they want in supermarkets, ripping them to mp3 and then selling the CDs on the internet, which, once costs are recouped, means the mp3s cost a couple of quid. This means, of course, that plenty of remarkably new titles are turning up second hand pretty sharpish.

While this may not become a long term way of listening in the future, for the short term it’s a quick, cheap and easy way to pick up cheap music. Whether you only use Amazon Marketplace or merrily bid on 1p CDs on eBay, it’s never been easier to pick up second hand music and, while important cultural commentators would have you believe that physical formats are buggered and barely able to limp along for another year or two, for those of us who still like the idea of a record collection – and there are far more than the media would have you believe – it’s a great time to get as much as possible for as little as it’s ever cost.

That said, and in order to bring things to a close, I should warn you about some of the phenomenally cheeky attempts from some companies to cash in on those struggling as a result of the recession and looking for some quick income. MusicMagpie.co.uk is a new site offering to buy your used CDs, DVDs and games. Quick, it might be, but fair, I’m not so sure. Although run of the mill stuff will get you £1.20 here of £2.60 there, all CD boxsets appear to be valued at £3. Included below is screengrab showing what happened when I inputted a few barcodes from what was around me. Pay particular attention to the price they’d give me for The Complete Motown Singles Vol. 11a – £45 new, bloody rare and not an awful lot less second hand. Unbelievable! 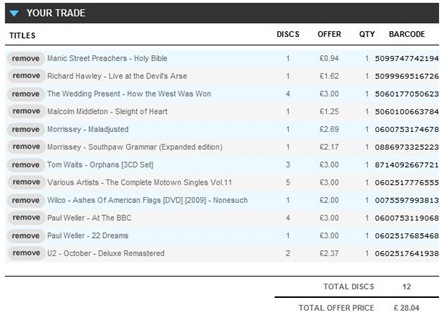