The Welsh accent can be a gently lulling listen or a stadium shattering surge in the world of music and there are fine exponents of each. Anyone who has ever loved Gorky’s Zygotic Mynci (anyone who has heard them, surely) will know how charmingly melodic it can be, even lullaby-like at times. Such fans should find similar thrills in this shimmering collection. 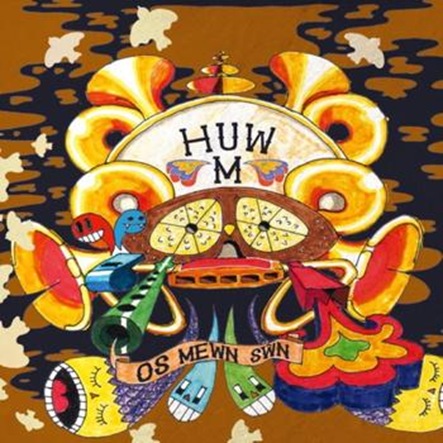 I owe my love of this album to an enthusiastic, passionate and knowledgeable record shop owner. It’s a phrase I used to use quite a lot, but which I rarely get to utter these days. Whilst down in Cardiff for my regular burst of rugby-based humiliation at the hands of the All Blacks, I made time for a trip to Spillers, in its new home in the Morgan Arcade. Since my first visit in September, the shop has grown in character – and stock – and has continued the magic of 36 The Hayes. As I walked upstairs to the vinyl floor, I heard Ashli – Spillers boss – telling another customer that the album playing in the shop was on for him and that she thought he’d like it. He did, and so did I.

Twitter followers will recall how Ashli then proceeded to recommend me a ton of vinyl, all but one I already had! At the last minute, I asked her to chuck in the album that was playing too. I’m really rather glad I did that, on reflection. ‘Os Mewn Sŵn’ by Huw M is a joyous sounding set of orchestrated indie pop. I would comment on the lyrics except that they’re all in Welsh and I speak about six words of the language.

Put simply, if you like your delicate indie pop – be it Gorky’s, early Belle And Sebastian or Camera Obscura – then you will find plenty to enjoy here. The arching string figure of ‘Y Drôr Sy’n Dal Y Sanau’ is one of many highlights, opener ‘Hiraeth Mawr A Hiraeth Creulon’ is ridiculously catchy and surprisingly easy to sing along to considering I don’t have a clue what he’s saying!

I miss my days of buying whatever was playing in my local independent record shop. A fabulous record like this, which I would otherwise have almost certainly never found, is the reason why.